Fr. Michael J. McGivney, Founder of the Knights of Columbus, has a special connection to Baltimore, Maryland. 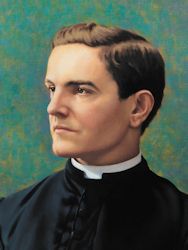 He studied at St. Mary’s Seminary in Baltimore, Maryland. After four years, on December 22, 1877, he was ordained in Baltimore’s historic Cathedral of the Assumption by Archbishop (later Cardinal) James Gibbons. A few days later, with his widowed mother present, he said his first Mass at Immaculate Conception Church in Waterbury, Connecticut.

The Knights of Columbus was formally founded as a Catholic, fraternal benefit society on March 29, 1882 by Father McGivney, then Pastor of Saint Mary’s Church, in New Haven, Connecticut. The Connecticut legislature granted a charter to the Knights of Columbus on this date, formally establishing it as a legal corporation. The Order’s principles in 1882 were “Unity” and “Charity.” The concepts of “Fraternity” and “Patriotism” were added later. The Order was founded to assist widows and orphans and to care for the many Irish immigrants who were then entering the United States with no “social safety net.”

As our Order was founded by a Roman Catholic priest — whose cause for Sainthood is now being evaluated by the Vatican — the Father McGivney Guild was established and you are invited to join. The Knights of Columbus has always by its founding principles and by Faith stood in unison with His Holiness, the Holy Father, with our Bishops and with our Priests. The Order makes every effort to support seminarians in every way possible: fraternally, financially and through scholarship support. At present, 60% of all seminarians throughout the U.S. are receiving financial assistance through the Knights. The Maryland State Council comprising the Archdiocese of Baltimore, Archdiocese of Washington and the Diocese of Wilmington, sponsors almost 100% of all seminarians through its subsidiary Councils.

If you are called to a priestly vocation, why not investigate the Knights of Columbus? We are the largest Catholic fraternal organization in the world with 1.8 million members internationally. Each Council of our Order has a Chaplain who is the lifeblood of the membership directing our spiritual needs and guiding its members in our Faith. We want always to stand in lock step with the clergy in our new Millennium and support our priests in every manner possible.

God, our Father, protector of the poor and defender of the widow and orphan, you called your priest, Father Michael J. McGivney, to be an apostle of Christian family life and to lead the young to the generous service of their neighbor. Through the example of his life and virtue may we follow your Son, Jesus Christ, more closely, fulfilling his commandment of charity and building up his Body which is the Church. Let the inspiration of your servant prompt us to greater confidence in your love so that we may continue his work of caring for the needy and the outcast. We humbly ask that you glorify your venerable servant Father Michael J. McGivney on earth according to the design of your holy will. Through his intercession, grant the favor I now present (here make your request). Through Christ our Lord. Amen.